Hello Kittens! My experiment to read a little bit from every genre continues to succeed beyond what I could ever imagine. Had you asked me a few years ago, I would have told you vociferously that I do not read the Science Fiction or Fantasy genres. More and more, I am discovering that I am wrong about that. This week’s book is a case in point. I had never heard of Duncan Hamilton before, but now I am hooked and incredibly frustrated that the next book in this fantasy series is month’s away from publication. Also, I can now bond with my patrons on a certain library-related matter because my library does not currently carry Mr. Hamilton’s books! I’ll be working on that from my end, but in the meantime, I’ll be going to the next county over to read more from this author who shows us that chivalry is not dead, but it has put on a few pounds. 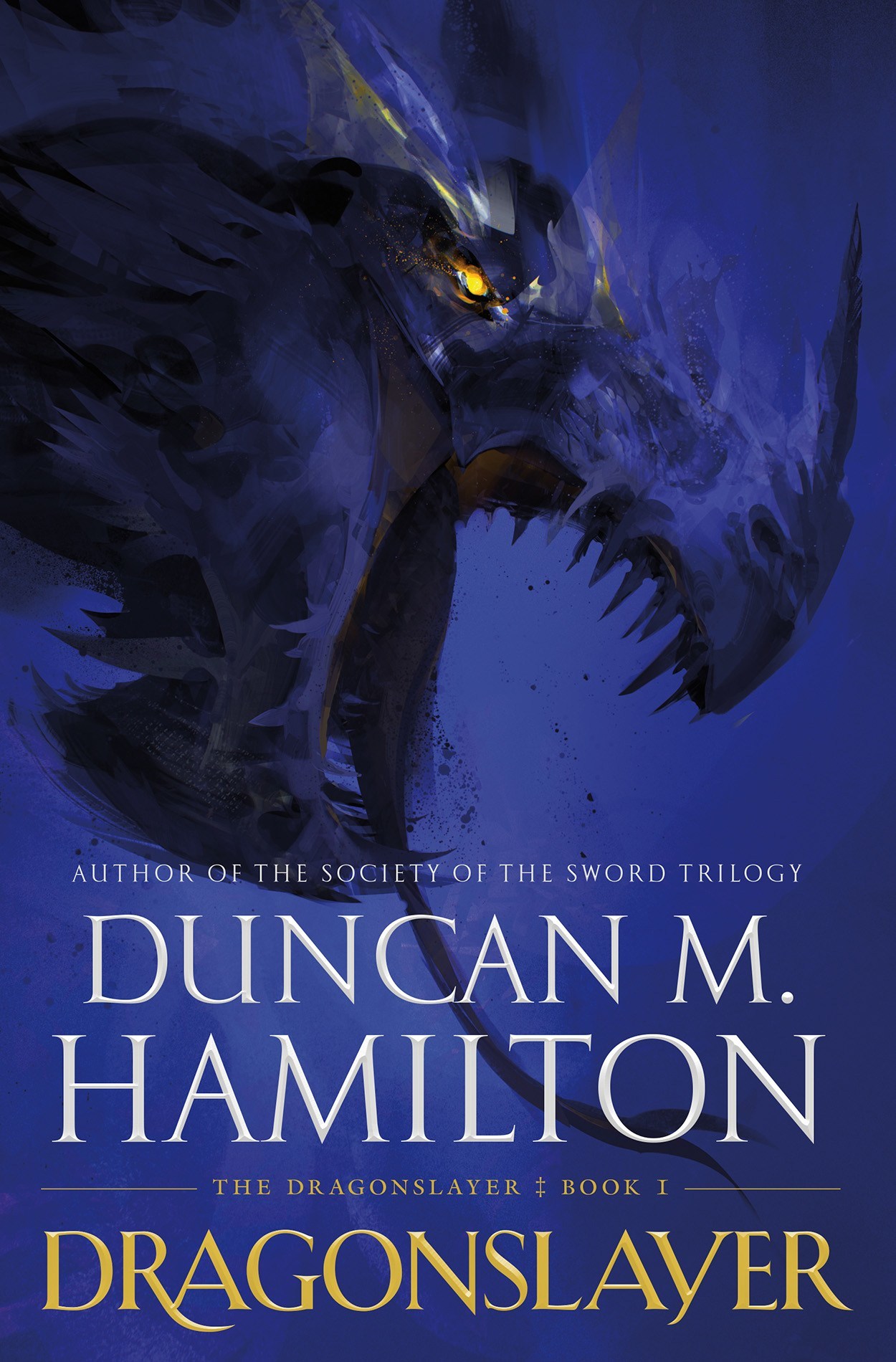 Many people are looking for a great adventure now that the Game of Thrones TV series has come to an end and it’s going to be a while before we get the next book in that series (fingers crossed all you book optimists). Dragonslayer may help slake the thirst of those who want to dig in to another adventure featuring noble knights, sellswords, magic, and dragons. The story is set in the land of Mirabaya and focuses on the stories of Guillot de Villerauvais (also known as “Gill”), Solène, and Alpheratz. Gill is the last living Chevalier of the Silver Circle, a legendary group of knights that were known for ridding the lands of dragons, at least until the last few generations, when they became known for less-chivalrous activities such as drinking and gambling. Solène is a young woman living in a village in Mirabaya who is trying very hard to hide the fact that she possesses magical abilities. Magic has been outlawed throughout the land and she risks her life if she is discovered, but she is not in complete control of her abilities. Alpheratz is a dragon who has awoken from a long slumber to find that the world is nothing like he remembers.

As Gill is called upon to serve his country after years of wallowing in self-pity and alcoholic beverages on the outskirts of civilization, many will wonder if he is up to this task. Dragons were thought to be either extinct or a fairy tale and Gill hasn’t won a fight against something as measly as his own willpower in many years. Facing this threat will help restore some of his lost honor and give his life meaning again…possibly. Either way, as the last Chevalier of the Silver Circle, he’s the only option that Mirabaya has.

Solène, on the other hand, is finding the potential for freedom in this new quest. On the run for most of her life, she has finally found a community that does not shun her abilities. In fact, they appear to welcome it. She’s not out of danger, since magic is not accepted in the world at large, but with the protection of a seemingly all-powerful benefactor with connections to the king, Solène begins to relax her guard. Having met Gill, she has not doubt about his honor, but some significant concerns about his ability to get the job done. She’s willing to risk a lot to see that he succeeds.

Alperatz is out for vengeance. The humans have taken his family and his community from him. They have invaded his inner sanctum and misused the magic of this world. He intends to see them all punished for that. After all, with all of his kind gone, what does he have to look forward to other than an extended lifetime of loneliness?

At the beginning of the story none of these characters know each other but their destinies become entwined as everything progresses. The story has political intrigue, power struggles, betrayals, magical objects, and an only partially recovered history of events. It is incredibly fast-paced, putting a lot of storyline and history into 300 pages. Hamilton’s earlier works are also set in this world, but are not necessary to understand this story. The world-building is complex but not overwhelming for the first novel in this trilogy. There are plenty of questions left unanswered, but the reader gets all of the information that they need in the meantime.

The writing is simply beautiful. Hamilton’s work appears to have primarily been self-published up until this series, so hopefully working with a mainstream publisher will give him the recognition to launch these books to a larger audience. Fans of fantasy will enjoy the action-packed fight scenes and character development. With a cliffhanger ending that will have readers asking how soon the next book will be published, this is a promising start to a series I intend to see through to the end.

Disclaimer: I received an advance uncorrected proof of this title from the publisher through BookishFirst in exchange for an honest review.

My rating: The book has some death scenes that can get a little gruesome. It is an epic battle for survival after all. I don’t think that will stop most readers, but it is worth mentioning.

One thought on “Dragonslayer by Duncan M. Hamilton”