What up Kittens? I am in a fabulous mood after a weekend full of truly excellent reading. Finally, I have found for you the elusive 5 glasses of lemonade rating for a satisfying mystery that is NOT a cozy! Yes, you read that right. It is not a cozy…at least not in the traditional sense. The Department of Sensistive Crimes by Alexander McCall-Smith has been billed by his publishers (and presumably himself) as “Scandi Lite” or “Scandi blanc”. Supposedly it is a new subgenre in crime fiction and we’ll have to see if it takes off. I, for one, think people are really going to like this, but I’m not sure how it will play with hard-core mystery fans. For the time being, I like to think of Gretchen Wieners and “fetch” from Mean Girls whenever I think about McCall-Smith coining this new term. I also have to say that this book helped expand my vocabulary in a non-intimidating way. Here is a selection of the terms that I had to check the definition of from this book: concomitants, philately, auto-didact, abstruse, locus, solipsistic, perfidy, sinecure, and profligacy. For such a short book, it was quite the vocabulary lesson, but that only adds to the charm of this book for me.

Title: The Department of Sensitive Crimes 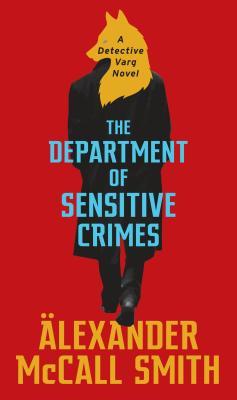 Alexander McCall-Smith is probably best known for his No. 1 Ladies Detective Agency novels, so starting a new series is likely no easy feat. In The Department of Sensitive Crimes we meet Ulf Varg, a detective who works as part of a small team to investigate the crimes that are deemed “sensitive” and therefore are diverted from the regular field police to this special unit. Varg drives a charming car and lives alone, his wife having left him some years before. He is an unassuming but thoughtful detective who might have a little bit of a crush on a coworker but would never act upon it. Throughout the course of the novel he will investigate a stabbing, multiple missing persons cases, and a concerning incident with a possible werewolf. Through it all, he maintains his calm and pleasant demeanor, even when working with those whose nonstop chatter might ruffle his feathers a little bit.

The Sensitive Crimes unit is charming and easy to like. In the unit we are introduced to the full range of characters we have come to expect in these situations, including the weekend angler whose just trying to collect a paycheck until he retires and the overeager workaholic who somehow manages to maintain a perfect home life. The reader may be expecting a dark turn any moment if they’re accustomed to Nordic Noir but **spoiler alert**, it never comes. This book is a comforting read and will appeal as much to fans of travel as it does to fans of cozy mysteries. Think of this title as what would result if Jan Karon wrote a mystery novel.

I have only a few minor criticisms of the novel itself, nothing that should dissuade readers in the least. First, Varg references the story of the little Dutch boy with his finger in the dyke. A little light digging on the Internet reveals this to be a largely American story that isn’t well known in Scandinavia, so it diminishes the setting a little bit for me. The second concern that I had was that the novel treats the presumed disappearance of a young lady somewhat lightly. It fits in with the theme of the entire novel, but it is a jarring turn of events from the traditional mystery novel which would treat that type of thing with urgency. The whole book gives the impression of a forced slow-down if the reader is a crime buff, and it does take some adjustment. Lastly, the book references the fact that the detective’s name translates to Wolf Wolf over and over again, but if there is any other connection to that, I missed it. Possibly it is a build up to a future novel, but it gets really repetitive after a while.

Nonetheless, I would have no trouble recommending this title to patrons. I can’t think of anything that would be a cause for significant complaint. I intend to start pulling this one out for people who are looking for a good easy read.

Disclaimer: No disclaimer needed on this one. I checked it out from my local library.

5 glasses of lemonade= you could recommend this book to anyone.  There is nothing in here that is going to upset anyone and you could start handing it out on street corners.  (This kind of book is a Librarian’s dream.  As much as we love good literature, suggesting a book for someone can be nerve-wracking work that can backfire BIG TIME.)

There’s no cursing, no gore. This book is nothing but charm and good humor set in a place that many people would love to visit. It will make you want to pop down to a cafe and have a warm beverage. Comfort reading at its best, but still with plenty of twists to keep you entertained.