Hello Kittens! This title was a little late to get on my radar considering it’s a trilogy that will be complete this October. I’m going through a YA Fantasy renaissance and going back to start some of the series that I missed from the last 5 years or so. If you, like me, missed this one the first time around, I highly recommend giving it a try. Plus, if you start it now, you can have the first and second books done before the finale this Fall. 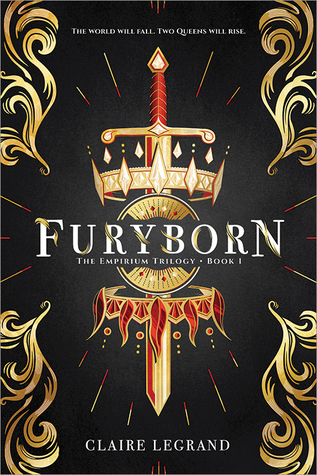 Furyborn is told in two timelines focusing on two women and a prophecy. The book starts with a foundational scene where a character named Rielle is giving birth to her first child, a girl. She is mostly alone for this process and we learn that her husband, the king, has died and that she is viewed as responsible for his death. After a traumatic event, we find ourselves meeting a character named Eliana who lives 1,000 years later. Alternating chapters tell us their stories. While their lives are very different, we learn that they are bound together by the same prophecy regarding two queens in this land, one who will destroy the land and one who will save it.

In a land of elemental magic, Rielle has had to hide her abilities because she has had trouble controlling them in the past. When her magic makes itself known at a public event, Rielle is challenged by the King and his court to prove that she is the Sun Queen, the queen from the prophecy who will save her people. In order to prove this, Rielle is forced to undergo a series of challenges to show that she can master all of the elements in this magic system. If she fails, she will most likely be killed, but if she succeeds, she will assume her role as a protector of the realm.

Eliana just wants to keep her family safe. If that means working for the Empire, so be it. She emotionally disconnects herself from the work that she is doing, even though she knows that nearly every person she turns over to the Empire’s forces will be executed, regardless of age, gender, or other factors. The people around her, especially her little brother Remy, are always working to remind her of her humanity. She’s not a big fan of their efforts and justifies that her work keeps them all much safer. When the Empire asks her to find a rebel mercenary known as the Wolf, she is all too happy to oblige. Unfortunately, the Wolf finds her first, her mother is taken by seemingly invisible forces, and Eliana is forced to work with the rebels in order to try to get her back.

It’s fast-paced and very well-developed. The elemental magic system is well thought out, and we really only get a taste of the lore surrounding it from this first book. I also appreciated how much the story was starting to come together. As the reader, you’ll catch on to certain elements of commonality before the characters do, but I didn’t mind that at all.

I’m definitely invested enough to keep going with this series. I already got the second book, Kingsbane, from a nearby library offering curbside services right now.

The book lacks symmetry for my taste. When we get that first chapter, I expected that we would be circling back to that event by the end, but that was not the case. While we did get much closer to it, we evidently won’t be resolving a lot of what happened in that first scene until the second or third books.

Disclaimer: No disclaimer needed. I borrowed an e-book of this title from my library.

My library rating: While I didn’t think it was too much, some people might object to the steamy scenes in the book (there’s only 2). It also gets a little gruesome towards the end and that was a little tough to read (think innocent people being used without willpower).

My personal preference rating: 4 stars. I really enjoyed this one and didn’t mind the steamy scenes or the tough battle scenes. We’re just getting started with what I think are going to be some epic love stories and truly magnificent strong female characters.

2 thoughts on “Furyborn by Claire Legrand”