Hellooooo Kittens! I have got an upcoming spooky thriller release for you today. I found Riley Sager’s books just as quarantine was getting going and quickly became a big fan. I will literally read anything he writes from now on because everything I’ve read from him ends up being a favorite. It doesn’t come out for about a week and a half, but if you have not pre-ordered it or reserved it from your local library, hopefully this review will convince you to do so. This book is being widely compared to The Haunting of Hill House by Shirley Jackson (I’ll just have to take their word for it since I haven’t read that one, but you best believe I have added it to my TBR after reading this one!) 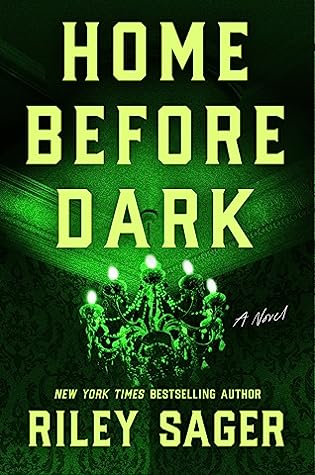 Maggie Holt has lived her life in the shadow of a house she lived in as a little girl, and the book her father wrote after they lived there for only 20 days. The house is now one of the most famous haunted houses in the country and Maggie’s name is synonymous with the little girl whose terror is portrayed in her father’s famous book. The only problem: Maggie doesn’t remember any of the events from that book and suspects that her parents made the whole thing up. She has grown up an outcast because of that book, and her demands for real answers have gone unheeded by her parents, which stilted her relationship with them.

After her father’s death, Maggie gets the unexpected opportunity to return to the house as an adult to try and find out what really happened. As a designer, she approaches the house like any other project she tackles, but she sets aside time to dig into the house’s history and what really happened to her family in the time that she spent there. The longer she’s in the house, the more memories begin to return to her, and she is forced to confront a startling truth: maybe the book wasn’t as full of lies as she originally believed? As the house’s caretaker once said, “Baneberry Hall remembers…And sometimes history has a way of repeating itself.”

It’s classified as both Thriller and Horror, so prepare yourself before you start because it’s going to get creepy.

The story is told in alternating chapters between what Maggie is experiencing and remembering and corresponding chapters from her father’s book. I really loved that approach to telling this story, especially because the similarities between the chapters increase as the book goes on.

I also love how Maggie’s character approaches the entire history of the house. She doesn’t believe it’s haunted and goes through every logical explanation that she can. Some of her explanations are so solid that even the reader will be questioning her dad’s book before long. This is an awesome device as you are reading, because it essentially turns her father’s book into an unreliable narrator.

I also loved how many twists there were! Twists on twists on twists. It is a thriller reader’s paradise. All of the twists are believable and you have the information in there to parse a few of them out if you pay attention. I will tell you that I pegged a villain pretty early on, then retired that guess when one twist made me re-evaluate, only to get some vindication for my guess in the end. On the other hand, I also have to admit that I pegged another character as a villain, only to be completely wrong. He wasn’t a villain, he just annoyed me and acted in a somewhat creepy manner.

Sony already bought the film rights for the book and I cannot wait to see what they do with it.

I think there may have been a few unplugged plot holes in there regarding some of the spooky events. At some point in the near future I’m going to re-read this one and see if those things actually were explained and I just missed it (entirely possible). At times I was reading so fast to get to the next “thing” that was going to happen that I was actually just skimming some of the words.

Also, this book may have ruined what was previously one of my favorite scenes in The Sound of Music. I’m not sure I’ll ever be able to hear that song again without getting goosebumps.

Disclaimer: I originally received an e-galley of this title from the publisher via NetGalley, but then it came out as an early release Book of the Month pick, so I ended up primarily reading the physical copy that way. Either way, the preceding review is my honest opinion of the book.

My library rating: This rating is primarily due to the number of curse words in here. I’ll admit that I barely notice them when I’m reading anymore, but I still have patrons who will mark them out in the books that they read (welcome to the South). I did a search on my e-galley to see how prevalent they were, and it was actually…pretty prevalent. I will still be recommending this book to a wide variety of adult readers. It was fantastic.

My personal preference rating: No surprise here. I gave this one 5 full stars. It was great and I look forward to reading it again soon (I already loaned out my copy to a friend). If you love thrillers, you need to get on the Riley Sager bandwagon like right now.

The Murder By the Book Bookstore is doing a live Zoom event with Riley Sager on June 30th, at 6pm Central time. Purchasing a copy of the book from the bookstore counts as your admission to the Zoom event, and it will even be a signed copy (not personalized since that deadline already passed, but signed is still cool.) The link for the event is here if you’re interested: https://www.murderbooks.com/event/riley-sager

I don’t earn anything from the event or sale of the book, etc. I just thought it was a cool opportunity for anyone who was interested. I live in a town that doesn’t get a lot of big authors for book signings generally, and while I know this event is solely because COVID-19 is preventing them from doing an in-person event, I would love to see bookstores offer stuff like this permanently. I don’t think we should stop having in-person events once it’s safe, but it would be nice to have more digital events for those of us who can’t attend locally.

One thought on “Home Before Dark by Riley Sager”