Hello Kittens! Today I have for you one of those books that everyone agrees sounds great, but few people actually pick up and read. That’s because this is on big honkin’ book. It’s just over 800 pages long. I actually read it in about a week, though that’s just a guess because I paused and read a few other things that had piled up after I got to the end of part 1. In any case, this is a standalone high fantasy book for adult readers that has dragons, magic, court intrigue, and a strong f/f romance set in a partially matriarchal society. While it is a large book, the experience of reading it didn’t feel that way. I felt like I was flying through this book and the only thing that reminded me that it was big was the fact that my arms kept getting heavy while I read it. It looks daunting, but it is absolutely worth the read.

Title: The Priory of the Orange Tree 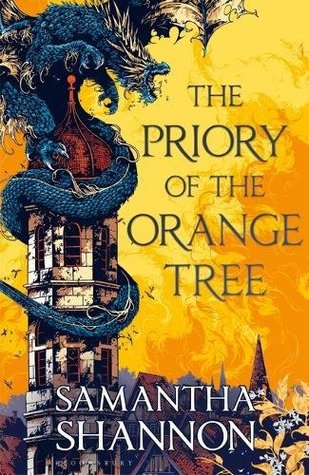 In The Priory of the Orange Tree we meet an expansive cast of characters. We meet Tané, a young woman who has trained for most of her life to be eligible to become a dragonrider in the East. She is getting ready to take the test that will determine if she is worthy to be chosen by a dragon when a stranger appears in the night who could alter her fate and delay or destroy her dream. She asks a friend for help in dealing with the situation and both of their lives, plus several others, are changed from that day forward.

We meet Ead, a young woman serving in the court of Queen Sabran IX, the 36th Queen of Inys and head of the House of Berethnet. Ead has been placed in the queen’s court to secretly protect her. While the court thinks she is an average servant, she is actually a mage working on behalf of the Priory of the Orange Tree. In Inys, she is forced to worship a religion that goes against everything the Priory has taught her, but she will risk everything to keep Queen Sabran safe. The longer she stays at court and the closer she gets to Queen Sabran, the more her feelings for this foreign Queen grow. While Ead may have a duty to the Priory, she is finding that more often than not, situations are not as clear as she once thought them to be.

Queen Sabran is a force to be reckoned with who has lived her life with the shadow of prophecy on her shoulders. The Queens of the House of Berethnet all have exactly one child, a daughter, and as long as they do, they keep their world safe from a red wyrm known as the Nameless One. The Nameless One has been sealed in a watery tomb for 1,000 years, but there are rumors all over the land that he is about to break free. The last time the Nameless One was free, he destroyed cities and brought a deadly plague to people that causes them to burn with an unquenchable fever. Sabran and her people believe that as long as she can keep the bloodline going, they will be sage from the Nameless One. As such, there is tremendous pressure in her court for Sabran to marry and become pregnant, thus ensuring the safety of her people.

We also meet Areloth, known as Loth to most. He is Sabran Berethnet’s best friend and when we first meet him he is being banished to Yscalin, a nearby land that has been invaded by enemies of Inys. He is being sent away because some in the Queen’s court felt that he was getting too close to the Queen and would not make an appropriate husband for her. As he faces an uncertain future, Loth has to work to figure out how to survive, how to get back to Inys, and how to make sure Sabran is safe. When he discovers that matters in Yscalin are more complex than he first thought, he will set out on an adventure in an attempt to keep all those that he holds dear safe. He is hardly an adventurer, but he pulls courage from somewhere deep inside to do what he must for those he loves.

All of these stories and more come together to tell a tale of many lands preparing to do battle with an old and dangerous foe. Across an immense world that Shannon weaves brilliantly, these characters will bring pieces of information from one land to the next that will help them figure out how the Nameless One was defeated last time, and how they might do so again. Watching all of the pieces come together is masterful, and even though this is a fantasy book, there are plenty of twists that will have readers flying through the pages.

The world-building is amazing here. In 800 pages, there was only one small part of the book that I didn’t feel had a lot of importance to the entire book. That’s amazing for a tome of this size. Every little thing flowed into the next thing and so on so that very few words are wasted. It was a huge book that didn’t feel cumbersome to read.

I also loved that we had matriarchal societies that were functioning beautifully. While there was trouble brewing on the horizon, all of the female characters are presented a formidable in their own right. We get some representation here, in that as far as I can tell, most of the characters are described as having dark or brown skin. We also get a variety of romantic relationships, with m/m, f/m, and f/f relationships represented. We don’t get any graphic descriptions of sexual scenes, but we do get beautiful relationship development. This is the kind of book that is going to hit you with some feelings.

I know we’re not supposed to judge books by their covers, but the cover on this book is truly stunning. I got the paperback edition (a trade paperback, not a mass market) and it has the most beautiful blue foiling on a dragon on the front. It features a slightly raised tower (which the dragon is curled around), and the rest of the cover is a vibrant orange-yellow tinge. It is absolutely stunning in person.

Like I said, there’s only one scene in the entire book that I didn’t completely understand. It is a scene where Ead is crossing a desert while attempting to return to the Priory. She meets a character and has a conversation with him, but as far as I can remember, we never see that character again and Ead leaves soon after without explanation to the rest of the party. It was just a little bit like a throwaway scene for me. It could have just been written in a few sentences and appended to the beginning of her next chapter. There were other places in the book where the passage of time was indicated and characters were in a new place without us getting detailed information about their journey, and it worked fine.

Disclaimer: No disclaimer needed. I purchased this book to participate in a read-a-thon and it looks gorgeous on my shelves.

My library rating: While the representation of homosexual relationships will turn some readers away, the lack of violence or descriptive sex scenes makes this one easy to recommend. The biggest hurdle other than that will just be getting people to pick up a book that big.

My personal preference rating: I gave this book 5 stars and I’ll be picking up more of Shannon’s work in the future. While this is a standalone, she also has a 7-book series that already has 3 works published, with a 4th due out next year.