Hello Kittens! I’ve got a great backlist title for you today. It’s going to appeal to fans of non-traditional thrillers and all the “city folk” who get freaked out just thinking about going into the woods. “Leave no trace” is a well-known concept when it comes to responsibly interacting with the great outdoors. The main idea is that whatever you bring with you must also leave with you so that you leave no trace that you were ever there. Letting nature remain undisturbed by your unnatural presence. This was an impulse grab at the library for me. I read an excerpt of the first few chapters quite a while ago on BookishFirst, but I wasn’t a winner in that drawing so I kind of moved on and forgot about this title. Too many books, too little time. I’m glad I found the time for this one and I hope you will clear a little time and space in your TBR for it.

Some of you may be thinking to yourself, “Hey Dani! You haven’t posted anything in a really long time. Aren’t you going to explain why?” To which I reply, “Nope. We’re just going to gloss over it and all move on with our lives. Enjoy the review darlin’.” 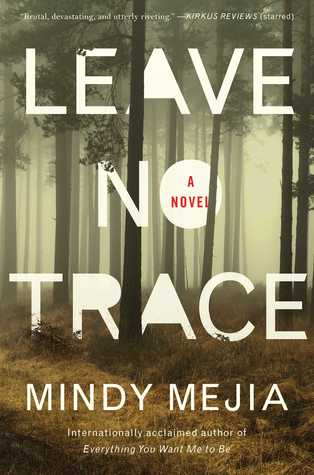 Lucas Blackthorn and his father Josiah disappeared in the wilds of Minnesota over a decade ago. They vanished without a trace from a camping trip and were never heard from again…until now. Lucas is discovered in a town not far from where he and his father originally disappeared. Josiah is nowhere to be found and Lucas won’t speak to anyone, not even to explain what happened to him and where his father is. The justice system delivers the uncommunicative Lucas to a local mental health facility where the Senior Psychiatrist for the facility makes a bold decision to pair a relatively inexperienced speech therapist with this challenging patient. Maya Stark has a history of her own and isn’t overly sure about this whole plan, especially not when her first encounter with Lucas results in Maya unconscious on the floor and Lucas attempting the first of many escapes.

This story kept me mesmerized for all 319 pages. The reader knows very little about either Lucas or Maya in the beginning of the story, but there are hints at darker pasts for both of them. Lucas comes across unhinged and extremely dangerous. He attempts to escape multiple times and always seems to be trying to return to the woods. The reader is left asking again and again, if he wanted to be in the woods so badly, why did he come out? He’s completely disconnected with modern society and doesn’t understand most of what is happening to him in the mental health system.

Maya, on the other hand, knows the system inside and out. She was a patient before she went to school for speech therapy, and her history with the facility is a persistent teaser throughout the first half of the book. As Maya struggles to acclimate to her new role and to this challenging patient, she also has to confront the decisions that led her to this point and the past that is still influencing her daily interactions. Maya’s character is well-developed and intriguing.

The book will have the reader fascinated by the inner workings of the mental health system and the courageous, hopeful, and sometimes disappointing staff who work within it. While the social commentary isn’t laid on too thick, the point is made well that the pipeline between the judicial system, the mental health system, and a successful re-entry into society is riddled with holes and switchbacks. Mejia paints a rich cast of characters, both patients and staff, and challenges the reader to not accept the first version of a story as the only version of the story.

It takes a lot to surprise me with a mystery, but this one got me. There are great twists throughout, and the final one is gut wrenching. You won’t be sure who to root for, if anyone, but the ending was extremely satisfying. There’s nothing like a story that wraps itself in a perfect little bow at the end. Sometimes a person just gets tired of cliffhangers.

Disclaimer: None needed. This was a library find and I fully encourage you to go pick up a copy from your local library too.

I don’t recall any curse words in this one. There are a couple of homicides, drug use, and an attempted rape, so it won’t be everyone’s glass of lemonade. Still, it’s a good addition to the genre and the underlying themes of the mental health system should keep a book group going for a while.