Hello Kittens! I continue to read up a storm from my quarantine conditions and I have got a treat for you today. It’s the sixth book in a series, so if you haven’t read the Book Retreat Mystery Series by Ellery Adams, now would be a good time to get started. I’ll be honest with you about this one: it saved the series for me. I found the fifth book to be a little underwhelming and I was starting to lose faith in the storyline. There’s a fantastic subplot that goes along with the series and I felt like the fifth book stretched the believability too far. That being said, “Murder in the Storybook Cottage” was amazing! It is a cozy quick read that will be available in less than two weeks and I think it may be just what someone people need to help deal with the stir crazy nature of staying at home.

Title: Murder in the Storybook Cottage 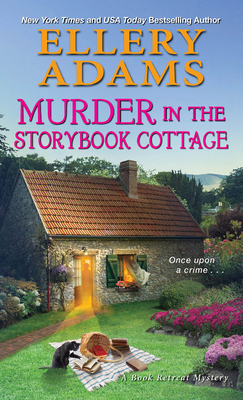 ***If you are unfamiliar with the Book Retreat series, this review will contain some spoilers.***

This is the sixth installment in the Book Retreat Mystery series by Ellery Adams following Jane Steward, her sons, and her loyal friends and staff at Storyton Hall. I discovered this series a few years ago after devouring Adams’ Books by the Bay series and fell instantly in love with the book-themed resort located in the mountains of Virginia. This book restored my faith in the series after a somewhat disappointing (in my opinion) 5th book.

We join the action as Jane prepares Storyton Hall to host a children’s book themed weekend for both book industry insiders and families. She is especially excited to be hosting her first Golden Ticket family, a program Jane initiated to bring a deserving family to Storyton who would not normally be able to afford a vacation to Storyton. Things are going well for Jane and her friends, especially as she continues to sell off the contents of the secret library in order to keep her family safe. All seems well as Jane and the staff prepare for a magical weekend, but even with their efforts to mitigate the danger at Storyton, a Rip Van Winkle (code for a deceased guest) is found on the property. The victim is unknown to Jane, her staff, or seemingly any of the arriving guests, which complicates the efforts to explain this death.

Adams has taken this series in a completely new direction with this addition and I am completely supportive of it. Jane is a strong woman, managing a business, taking care of two boys, and setting boundaries on her relationship. But this time, we see the toll that so many years of fighting to protect everyone in her life has taken on her. Jane wants nothing more than for everyone to be safe at Storyton, and she can’t believe that even with all of her efforts, there is still danger afoot. Fortunately for Jane, she never has to stand alone. With her friends the Cover Girls, her steadfast Fins, and her family surrounding her, we know that she will get to the bottom of the mystery while ensuring that all her guests have a weekend they will never forget.

The shining star of this series is truly the setting. When I get to the end of each story and remember that Storyton Hall is not a real place, I am always disappointed. Adams has designed a world that cherishes readers in all forms and she introduces characters that represent the diversity of literature. The books don’t shy away from the tough subjects: this one addresses racism and the lack of diversity in children’s literature. I am really looking forward to seeing where this series will go next…especially with the information that was set up in the epilogue! I can’t believe I have to wait to see how two of my favorite series are going to come together.

Disclaimer: I received an electronic galley of this book from the publisher via NetGalley in exchange for an honest review.

You have no idea how badly I wanted to give this book a 5-glass rating, but it has a few scenes that could be upsetting to some readers. There is mention of an accident that results in the death of a child, and there are also two somewhat grisly murders. While the details aren’t too explicit, there’s enough there that could put someone off. I would almost move this addition to the series out of the cozy category because of the manner of the deaths. Nonetheless, the murders themselves take place off of the page and there are no spicy scenes, so this is a series I will continue to widely recommend to mystery readers.