Hello Kittens! My read-a-palooza continues with a women’s fiction title this time. I came across Katherine Center’s work a couple of years ago and was blown away by it. I have a confession to make though…I picked out the first book because it had a stunning cover. Center had already published several novels at that time, but How to Walk Away had a unique cover style that has carried through with her last couple of publications. This title won’t be coming out for a few more months, but that gives you time to catch up on Center’s other titles. I admit that this wasn’t my favorite of her books, but it was still very good and I think that people will enjoy escaping into these types of novels right now.

Title: What You Wish For 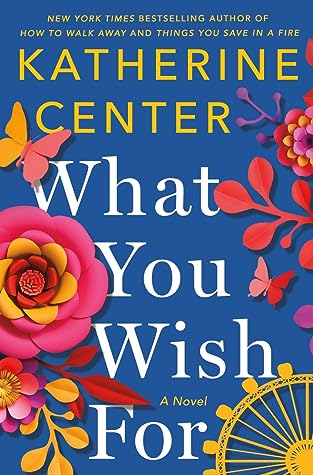 Katherine Center’s newest novel, What You Wish For, focuses on a young Librarian named Samantha who is working at a private school. When her boss, who is also a mentor and friend, passes away unexpectedly, Sam’s life is thrown for a loop. She’s barely recovered from the funeral when she gets the news that the replacement principal for her school is a man that she had a major crush on several years back. As in, a crush that was so bad that she fled the state to get over him. She remembers him as a goofy and lovable guy who was a great teacher, but she worries that once she sees him again, all of the old feelings are going to come rushing back.

As Sam struggles to adjust to so many changes in her life, Duncan (her former heartthrob and current boss) settles into his new position. This Duncan, however, is nothing like the person Sam remembers. This Duncan is hyper-focused on school security, increasing the school’s security measures at the expense of everything else. As Sam realizes that the school she loves and her mentor’s legacy is in danger of being destroyed by Duncan, she prepares to fight the battle of her life. She works to forget the man that she once knew so that she can stand up to the “new Duncan” and convince him that his efforts are misguided when it comes to this school. She’s ready to fight for her students and her colleagues, but when she discovers some things in Duncan’s past that help explain his demeanor now, she’ll have to fight just as hard to save the person he once was before he’s gone forever.

This book covers a lot of ground in a relatively short period of time. It’s a quick read with a lot of emotional depth. The characters are all dealing with grief in different forms and both Samantha and Duncan have experience major transformations over the course of the story. The setting is a big part of the story, since most of the action takes place within the private school, but descriptions of the school and its history do not bog down the narrative. There’s even a lovable canine for readers who like that kind of thing.

Center’s books tend to focus on emotional development and characters who survive and thrive when the deck is stacked against them. The main character, Samantha, has epilepsy, and I appreciated how her emotional responses to how people treated her as a result of her epilepsy were just as important to the story as the disorder itself was. At the same time, the story only narrowly focuses on that plot line and thankfully doesn’t try to deeply educate the reader on the medical aspects of epilepsy (there’s a time and a place for that kind of reading.)

I’ve read Katherine Center’s last two books, How to Walk Away and Things You Save in a Fire, so I had an idea of what I was in for. This book doesn’t rank as high for me as her previous two did. Samantha’s story did still pull at my heart strings, and I made it almost all the way through the story before I was reduced to tears (a feat that happened much earlier in the previous novels). Ultimately, I felt that we spent too long being primed to hate Duncan in this book. He is portrayed and cold and isolated for more than half of the book and it made it hard for me as a reader to want to root for him in the end. This was partially due to how the passage of time was utilized in the book because the first half of the book took place over the course of a few weeks while the second half of the book, especially the parts regarding the efforts to rehabilitate the old Duncan, felt like we were fast-forwarding through weeks and months to reach the conclusion. I also really liked the drama that Tina and Kent’s characters added to the story, but I felt like their conclusions were rushed as well. It seemed unlikely that Tina would have such a significant change of heart regarding Samantha.

Honestly though, those issues are minor. This was a great read that is an easy recommendation to patrons. Center’s backlist constitutes solid recommendations as well and I fully expect that Katherine Center will remain an author whose releases are go-tos for me.

Disclaimer: I received an electronic galley of this title from the publisher via NetGalley in exchange for an honest review.

5 glasses of lemonade= you could recommend this book to anyone.  There is nothing in here that is going to upset anyone and you could start handing it out on street corners.  (This kind of book is a Librarian’s dream.  As much as we love good literature, suggesting a book for someone can be nerve-wracking work that can backfire BIG TIME.)

While there is a brief discussion of school violence here, I don’t think it is graphic enough to put off the majority of readers. I think this title is recommendable on a grand scale. The romance isn’t overwhelming and the story is sweet.