Hello Kittens! It’s been a while since I went in blind to read a book, but I saw this title recommended a few times on BookTube and I decided to just take a shot. I’m taking you back to high school with this read. In the middle of reading this story, I was feeling the nostalgia. I was a nerdy semi-jock with a close-knit but utterly weird and unpopular group of friends. While the main character in this book falls into decidedly different categories than I did, his experience still rings true. This book is full of witty teenage sarcasm and drama. You may be thanking your lucky stars that this wasn’t your high school experience, but this fish-out-of-water story is thought-provoking and I hope it takes your mind off of everything else right now.

Title: The Field Guide to the North American Teenager 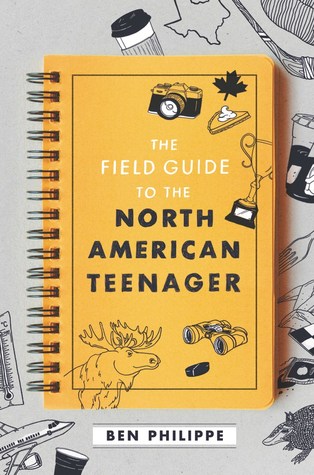 Norris curses Texas and Stephen Fuller Austin the very first day he and his mother land in Austin, TX. He’s a black French Canadian kid from Montreal and he can tell before they even finish their airport layovers that he is a spectacle for the American people. They don’t get his hockey jersey, they openly stare, and they are resistant to his efforts to educate them. Thus begins our introduction to the sassy teen who is the focus of this YA novel. Norris is less than enthused to be starting over midway through his high school career. The only thing worse than his first impressions of his new classmates and teachers are their first impressions of him.

With a mouth that speaks long before his brain fully engages sometimes, Norris is perfectly happy to wait out the next few years in exile, not interacting with the natives. He takes to jotting down his observations in a diary given to him by an overenthusiastic guidance counselor on his first day of school. Considering how his writings revolve around examinations of the Texan-American species, with entries about “jocks and cheerleaders”, “Male bonding”, and “The American Prom”, the diary can be considered a minor character in the story.

As time goes on, Norris makes a few connections with the locals, trying out several new experiences. With a cheerleader named Madison acting as an unofficial guide to romance and a girl named Aarti acting as his unofficial guide to living, Norris is in better hands than he realizes. He even manages to form a hockey team with the help of a persistent new “friend” named Liam. Texas may not be as horrible as he first imagined (except for the relentless heat). Just when things start looking up, everything comes crashing down in typical teenage drama fashion.

While the book comes off as light reading, the truth is it examines several hot button topics in American culture. In particular, we get looks into the immigrant experience, pervasive racism, homophobia, mental health, and the continual threat that everyday life holds for young black men. None of these get a particularly deep examination, but the everyday nature of how Phillipe treats them in the story is almost more damning than any intense scrutiny would have provided. Norris and his friends are all encountering different aspects of these subjects and they all handle them in different fashions, not all of which are completely healthy. The story is not without consequences for typical teenage decision-making, and the inherent lessons are clear for any reader.

Why I liked it:
A lot of YA treats relationships at an accelerated pace, and I really appreciate that Phillipe didn’t artificially speed those up in here. The friendships and the romances develop at a reasonable pace. Old slights aren’t completely forgotten even once they are forgiven. That lines up a lot more closely with the teenage experience that I remember than a lot of YA does. (Seriously though. Pay attention to the timeline in the next couple of YA romances you pick up and see how unnaturally fast the relationships develop.)

I also really enjoyed finding out in the Acknowledgments section that some of the characters are based off of people in the authors life. In particular, I really like knowing that there is a real Aarti out there somewhere, hopefully taking over the world.

Disclaimer: No disclaimer needed. I borrowed a digital version of this title from my library.

My library rating: There were a fair number of curse words in here, including sexual and racial slurs, so I’m going to limit the recommendable audience just slightly.

My personal preference rating: I gave this one 3 stars. I liked it but didn’t love it. That won’t stop me from recommending it to most people who are looking for a good contemporary YA story.