Hello Kittens! I’ve got a courtroom thriller for you today. Even as I write it I can’t believe that this is what I’m offering you right now. Can I tell you a secret? Courtroom thrillers are some of my least favorite books of all time. I had a few unfortunate Grisham and Turow experiences and I’ve never fully recovered. This book, however, may just have turned things around. Not for Grisham or Turow. Nope. That is never going to happen again. But Graham Moore has redeemed this category for me. He’s given us pleasant but flawed characters and a story where you want to root for everyone and no one all at the same time. Everyone’s a winner and everyone’s a loser with this one. It’s complex but deeply satisfying. It seems like everyone has been talking about this one so I hope you all will enjoy it as much as I did. 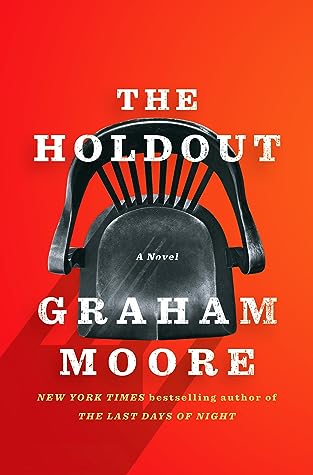 It has been 10 years since Maya Seale sat on the jury that handed down the fate of Bobby Nock. In the years since, Maya has been vilified by the court of public opinion and has been publicly blamed by other members of the jury for the outcome of the case. As far as the general public is concerned, that jury let a guilty man go free, and they did it because of Maya.

In the years since, Maya has built a good life. She’s a lawyer, fighting legal battles with the perspective that she gained from her time as a juror. She believes that their verdict was the right one, even with everything that has happened since. But when she is approached in the courthouse by another one of the jurors from that trial, one who quickly and vehemently threw her under the bus after the trial, she is forced to confront what she has spent years trying to move on from.

A podcast turned Netflix-special called Murder Town is reuniting the original jurors to look at the case on its 10-year anniversary. Maya is reluctant to participate. The trial is done and laid to rest and no significant new evidence has ever appeared, or so she thinks. This other juror swears to her that he has found new evidence that proves their verdict was wrong beyond the shadow of a doubt. He won’t tell her what he knows yet, but his belief in this new evidence is absolute.

Against her better judgment, and with outside pressure guiding her decisions, Maya ultimately joins the other jurors for the reunion. Unfortunately, that decision will lead to serious consequences for Maya when a juror ends up dead and Maya is the prime suspect. Now she will have to face the justice system in yet another new role. Will she get the kind of juror that she was? Does she want to?

This story is a fascinating look at the justice system that we think we know. As these jurors discover: the lawyers are there to tell a story, the judge is there to make sure everyone plays by the rules, and the jury is there to make sure that justice is served. Can you ever be truly sure about something like this? Aren’t they all guilty of something?

I like how Moore handled the racial tension throughout the story. We got some really powerful monologues about identity and the role it plays in decision making. I also really enjoyed that all of the characters were changed so deeply by their participation on the jury, some for better and some for worse.

I also loved all of the twists. At one point or another I suspected nearly everyone throughout the course of this novel. While some of my guesses turned out to be correct, and I did guess a major plot twist, there was still plenty that I didn’t see coming.

“Out here, maybe somebody goes to jail. Maybe somebody doesn’t. But we never know the truth. The real, whole, definite truth. It’s impossible.” pg. 112

“Their punishment for being people who demanded answers was that they would be forced to go on in perpetuity with their doubts.” pg. 183-184

“It wasn’t that any of them made Carolina nervous. It was that once you combined them all…well, somehow it felt like these people were going to collide against each other like marbles. They were going to send each other in directions none of them saw coming.”

This is such a small thing…but there are spoilers for 3 Agatha Christie books included, and I don’t feel like it was necessary. I haven’t read much Agatha Christie, and maybe these were well-known plot twists, but they weren’t known to me and I was a little miffed.

Disclaimer: No disclaimer necessary. I chose this book for one of my Book of the Month subscriptions.

My library rating: I wish this could have been a completely unobjectionable recommendation, but there is a sexual assault (it mostly takes place off the page) and a sex addiction and there are a few scenes involving drugs. It’s really not that bad and I still think it would be a great book club selection for talking about the criminal justice system.

My personal preference rating: I gave this title 5 stars. I’m not a fan of courtroom thrillers usually, but this one was fast-paced, had entirely believable characters, more red herrings than you can shake a stick at, and still managed to expound upon some deep issues. It was a joy to read.

Investigation Discovery started a book club recently and they picked this as one of their selections. You can find more information about the ID Book Club here.

One thought on “The Holdout by Graham Moore”